K. D. Kragen - Writer of From Alone To Aloha 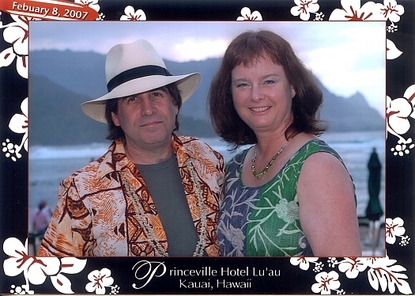 A third generation San Franciscan, K.D. grew up in the Italian District of the city. At 13 he began playing guitar, learning the songs of Joan Baez and Woody Guthrie. With his friend Lenny, they played at Italian parties and weddings, and at The Wine Cellar, Ghirardelli Square, with plans to later travel through Europe. But their plans were short-lived as the Vietnam War was on and K.D.'s number came up. He was drafted but snuck in under the wire into the U.S. Coast Guard, where he served 4 years in SAR (search and rescue) and ATON (aids to navigation).

After the service he married the love of his life, Janet, who helped him gain an appreciation of classical literature and he helped her gain an appreciation of classical music. His first favorite writers were Robert E. Howard, H. P. Lovecraft, Ray Bradbury, and Jules Verne, which is where his love of science fiction and horror began. With his Veterans benefits he went to college and got a B.A. in Philosophy from Azusa Pacific University, an M.A. in Philosophy of Religion from Denver Seminary, and finished his graduate studies in Philosophy at Syracuse University. It was during his college years that he began writing. He completed his first short story "The Chairs" in 1984.

In 1989 K.D. and family moved to Bainbridge Island, WA where he got a job washing dishes at the Streamliner Diner, joined a local writers group, and started his first novel titled Creatures of the Heart. (He worked at the diner until his wife told him he's no longer allowed to work outside the home; after that his writing output increased dramatically.) Since then he's finished 8 novels with two more in progress.

K.D. recently finished his seventh novel, the third in the series of The KillWare Chronicles, called The Accidental Prisoner (ArcheBooks Publishing, 2014), and eighth novel, third in the series of The Creature Chronicles, called Space Leviathan. His fourth novel, Plagueman, was released in December 2005 through ArcheBooks and is available for sale online as well as from your local bookstore. All his published works have also been reissued in paperback (and of course are available on Kindle).

For the past twelve years K.D. has been the managing editor of Scandia Patch Press, and for four years he was a faculty member of an experimental college Trumeau College Of The Arts, heading the philosophy department. When he's not writing novels, working on cars, editing the strange and delightful works of other local writers, speaking at writers conferences, cooking dinner or pumping out book reviews, K.D. is usually trying to get a little sleep. Aloha kakou.

Author Dave Kragen meets with Ka Ali'i Nene, Kaua'i, 2007. Special thanks to Adidas for Nene-striped sandals worn in honor of the auspicious occasion.