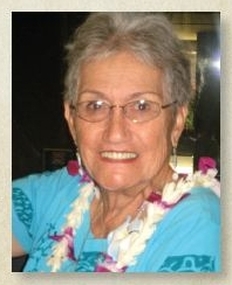 In 2004, I started writing a faith memoir/autobiography of my life. My story traces rejection at birth, neglect, abandonment, abuse, coping, recovery, and finally the celebration of reconciliation and reconnecting to my Creator.

During Lent of 2010, my 75th year of life, I had an "aha" moment where I understood that I could no longer reject the "other half" of who I am. My faith was deepened to a point of total acceptance of what I had been told was unacceptable. My mother had had a brief affair with an Hawaiian man that resulted in my birth in 1935. Both she and I were abandoned by my prejudiced family from Virginia. I had internalized this rejection—until now.

A thorn planted in my heart at birth has been removed.

In February 2010 I had lunch with a friend, CarrolAnn Barrows, who asked about my Hawaiian background (she loves Hawaiʻi and has visited several times).  I told her what I had heard from my mother: that my father was a popular and prominent Hawaiian and Sheriff of Honolulu when I was born. My mother had said his name was Duke Kah– something. My friend's partner Dale Nuce, an avid surfer, became curious. He googled "Sheriff of Hawaiʻi in 1935"; that was all it took for Dale to obtain the name "Duke Kahanamoku." As it turns out, it was Sam Kahanamoku who had the affair with my mother and is my true birth father.

I have to give credence to the strength and character I inherited from my real father from Hawaiʻi. The Aloha that he and his family professed as their creed lived and thrived in me, as I struggled in those early years. And it remains today, through the Grace of God. On August 24th 2010, I celebrated my healing and reconciliation in Hawaiʻi at the 120th birthday anniversary of Duke Kahanamoku.